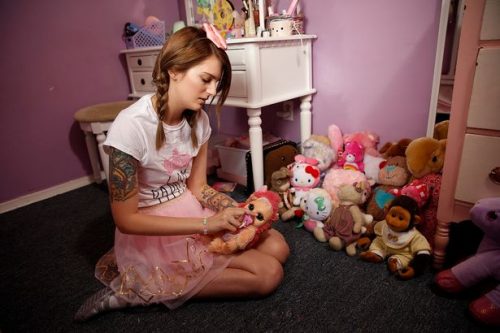 An ‘adult baby’, Jess has revealed that she likes to wear nappies, drink from bottles and ‘regress’ back to her infancy. The adult-turned-baby says that while people tend to claim the opposite, she is a fully-fledged, “very independent” adult.

According to MirrorOnline, snaps of her Adult Baby/Diaper Lover (ABDL) lifestyle are regularly uploaded to her YouTube channel, which boasts more than 160,000 subscribers.

“During the day, I’ll just be me – normal, adult me,” she said. “I work full time, I do my YouTube channel, streaming and other stuff like that. I have my own website, and then I also have other hobbies. I like to do art, I like to sing – just normal things.”

Jess, who lives in Lakeland, Florida, US, now reveals the struggles she and her boyfriend go through as their relationship is met with hostility by the public.

She said: “I’ve had people say that he’s [Stephen] abusive, or they say that he’s sick for wanting a girlfriend that acts like I do because then he probably imagines me as an actual kid – which is D!sgust!ng. “They say like ‘Oh he’s a paedophile, I wouldn’t leave him alone with my kid’.

But the 23-yer-old instead claimed the appeal of ADBL or DDLG is that the adult baby reposes all trust in their partner.

SEE ALSO:  2019 UTME: JAMB stops use of cyber cafes for registration of candidates

“The whole appeal to people with ADBL or DDLG dynamics or anything like that is that you are an adult and you’re submitting your control so totally to this dominant person, that you’re making yourself as vulnerable as a child.

“It’s just like, ‘Oh, you’re trusting me so much that you’re willing to regress to such a vulnerable stage’. That’s what is appealing to him. That you’re basically submitting entirely.”

While pink-haired Jess was $exually abused as a child, she rejects any link between her abuse and her apparent regression.

Saying that she would have been who she is even if she had not been abused, Jess noted: “I don’t feel like I’m doing this to cope. I never really think about it. It’s not this healing thing because this is just what I do with my life.

“I mean, I’m not going to sit there and say that there definitely isn’t some kind of link – but it’s also not to say that everyone who does this does so because they were abused and are coping with it.”