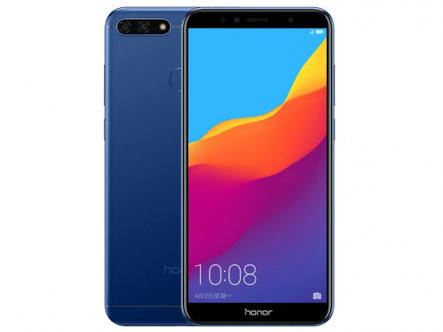 Honor is more or less a mid-range brand under Huawei and one of the recent additions is the Huawei Honor 7A. The new budget smartphone has modest specs and a nice build to go along. While the specs are not for ardent hardware followers, it is more than enough for average users. You also have perks like the latest software, fingerprint sensor and dual camera all packaged into a good looking smartphone. Read further to have more information on how much of a good buy this smartphone is.

Looking at the Huawei Honor 7A, you will notice the recent innovation in its build which includes an 18:9 aspect ratio and aluminium body with a glossy finish at the back panel. There’s is also a striking similarity to preceding Honor smartphones with little bezels in the way at the sides. The bottom bezel has Honor written on it while the physical buttons are arranged on the left side.

The Huawei Honor 7A has a a fairly large, not too crisp display which is not really full view anyway. It features a 5.7-inch IPS screen alongside 1440 X 720 pixels resolution. In addition, the pixel density stays at 282 ppi with ample brightness even under the sun.

Inside, you’d find a somewhat average battery supplying juice to the smartphone. However, minimal usage will give enough usage time which is ideally the 24 hrs timeframe. All thanks to the 3, 000mAh Li-Po battery which doesn’t have the quick charge feature.

Entering into the rapidly increasing tide of dual camera smartphones. The Huawei Honor 7A has a partnership of a 13MP main camera and the assistance of a 2MP camera mounted on the rear panel. Taking selfies is done by an 8MP front shooter with an f/2.0 aperture and a dedicated flash.

Behind the curtain, the show is run by a basic mid-range MediaTek processor. Despite the average power generated by the SoC, the eight core 64-bit Qualcomm MSM8937 Snapdragon 430 chipset with cores clocking at 1.5GHz delivers smooth performance. As for graphics, this is sorted by an Adreno 505 GPU complimenting the processing gusto.

In segue, the pizzazz is garnered by 2GB or 3GB depending on the variant. Both having 32GB storage space expandable by utilizing the dedicated SD card slot. You would also find Android 8.0 Oreo pre-installed on the device.

The smartphone is available for about 53, 000 naira on various online stores and smartphone retail outlets around.

Here are a few specs of the Huawei Honor 7A: