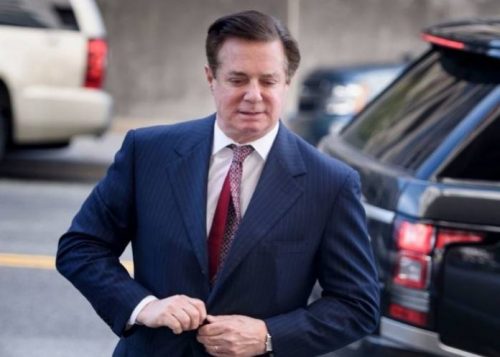 US President Donald Trump has been dealt a double blow after developments in two separate cases involving his former close associates.

Paul Manafort, Trump’s former campaign manager, was found guilty on Tuesday of eight financial crimes in the first trial victory of the special counsel investigation into the president’s associates.

The verdict came as the president’s former lawyer, Michael Cohen, separately pleaded guilty to campaign finance violations and other charges, saying he made payments to influence the 2016 election at the direction of a candidate for federal office.

In Manafort’s case, the jury found Manafort guilty on eight counts, including tax fraud, bank fraud and failure to declare foreign bank accounts. The federal judge declared a mistrial on 10 other counts the jury could not agree on after deliberating for four days.

Tuesday’s decision almost certainly guarantees years of prison for Manafort and established the ability of special counsel Robert Mueller’s team to persuade a jury of average citizens despite months of partisan attacks – including from Trump – on the investigation’s integrity.

Kevin Downing, Manafort’s lawyer, said his client was “disappointed” and was evaluating his options.

The charges against Manafort were among the first stemming from the investigation into Russian meddling in the 2016 presidential election.

The verdict raised immediate questions of whether the president would seek to pardon Manafort, the lone American charged by Mueller to opt for trial instead of cooperate. The president has not revealed his thinking but spoke sympathetically throughout the trial of his onetime aide.

After Tuesday’s verdict, Trump told reporters that Manafort is a “good man”.

“It’s a very sad thing that happened,” Trump said as he arrived for a rally in West Virginia. “It does not involve me,” he said. “It has nothing to do with Russian collusion … this is a witch-hunt and it’s a disgrace.”

Al Jazeera correspondent Andy Gallacher reports that “no matter what the president says, this case has been seen as an important test” for the Mueller investigation.

While the charges against Manafort largely predate his work on Trump’s campaign, “the verdict is being seen as legitimising Mueller’s investigation into collusion with Russia by the Trump campaign in 2016,” Gallacher said.

Mark Warner, the senior Democrat on the US Senate Intelligence Committee, said in a statement that the Manafort verdict refuted Trump’s repeated charge that the Mueller investigation was a “witch hunt”.

He warned that any attempt by Trump to use his presidential powers to pardon Manafort or interfere in Mueller’s probe “would be a gross abuse of power and require immediate action by Congress”.

Trump and his campaign were only a small part of Manafort’s trial, as jurors instead heard days of testimony about Manafort’s finances and what prosecutors say was a years-long tax-evasion and fraud scheme.

The judge gave until August 29 to decide whether to retry Manafort on charges on which the jury was deadlocked. As a result, he did not set a sentencing date on the other charges.

The trial in Virginia, is the first of two for Manafort. He faces a trial later this year in the District of Columbia on charges of conspiracy against the United States, conspiracy to launder money, making false statements and acting as an unregistered foreign agent for Ukrainian interests. He is also accused of witness tampering in that case.

In Cohen’s case, the former Trump lawyer, said he made payments to influence the 2016 presidential election at the direction of a candidate for federal office.

Cohen, 51, pleaded guilty to five counts of tax fraud, one of bank fraud and two counts of violating campaign finance laws. He could get about four to five years in prison at the sentencing on December 12.

Questioned by the federal judge, Cohen said he had paid sums of $130,000 and $150,000 each to two women who claimed they had affairs with Trump, acting at his boss’s request, in a bid to buy their silence “with the purpose of influencing the election”.

Cohen did not specify the women’s names, but the sums correspond to a payment known to have been made to adult film star Stormy Daniels just before the election to silence her claims of a one-night stand with Trump – and another destined for former Playboy model Karen McDougal.

He also did not name Trump, but said was “in coordination and at the direction of a candidate for federal office,” and the other was made “under direction of the same candidate”.

Under federal law, an expenditure to protect a candidate’s political fortunes can be construed as a campaign contribution, subject to federal laws that bar contributions from corporations and set limits on how much can be donated.

Cohen’s admission appears to implicate Trump himself in a crime, though whether – or when – a president can be prosecuted remains a matter of legal dispute.

The Justice Department’s Office of Legal Counsel, which provides legal advice and guidance to executive branch agencies, has held that a president cannot be indicted while in office. Trump’s lawyers have said that Mueller plans to adhere to that guidance, though Mueller’s office has never confirmed that. There would presumably be no bar against charging a president after he leaves the White House.

Trump’s personal lawyer, Rudy Giuliani, noted in a statement on Tuesday that “there is no allegation of any wrongdoing against the president in the government’s charges against Mr Cohen.”