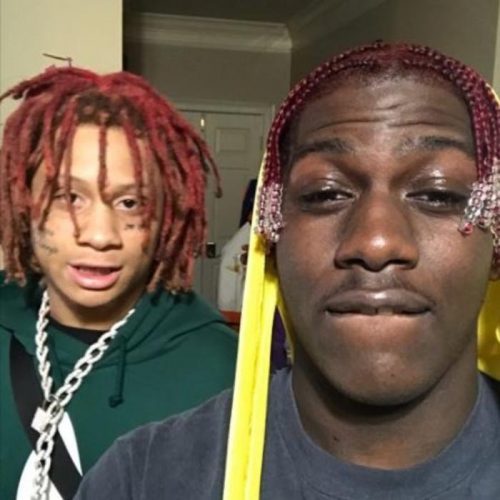 Who Run It Remix Lyrics by Trippie Redd & Lil Yachty

[Verse 2 – Lil Yachty]
Hold on “Lil Boat”
Ayy, who you think you ahead of? Not us “uh”
And these n—-s they mad ’cause I’m richer than them
Stay ganged up, I ain’t clicking with them
You can get shot, Terry Richardson them
N—a, I ball like the Pistons and them “uh”
F–k around, you come up missing like them “yeah”
You the type run to the sheriff “ha”
Act like you hard and you careless “yeah”
N—a, I’m a real a-s n—a, ain’t fake a n—a
Free my big brother out the prison cell “woo”
QC and P told ’em give ’em hell
Riding ’round in a Maybach with my n—a Pellz
Glock out, running we empty 12
B—h on my d–k, that’s a love spell “yeah”
B—h with the s—s, call her Annabelle “yeah”
If they won’t call, I don’t gotta yell “yeah”
Hundreds so crisp like a pack of kettles
F—–g her jewels with my n—a Jack
Crotched up, all of my brothers sack “yep”
Gotta run up them Ricky Racks “yep”
In the safe in the (?), we got hella plaques “yep”
Got more plaques on my wall than your brother teeth “facts”

Boy, you young, where your Similac?
Buying whips, yeah, we into that “yep”
F—–g hoes, yeah, we into that “yep”
Loving hoes, yeah, no n—a
Got a .223 inside the Hellcat “doot-doot”
Keep it all in the pack, huh
Hundred n—-s in your section
Hmm, where the hoes? N—a, that’s weird “p—y, p—y”
Cop a new Lamb, cop a new ‘Rari
Just to go and switch gears “skrt”
Burn out, burn out
Every time we turn out, make a big scene “yeah”
2K, 3K, 4K, 5K, spent it on my new jeans “skrt skrt skrt”
Gave big bro twenty-seven racks for his birthday, the world made a scene “facts”
Y’all don’t even know how a n—a live
Spend twenty racks like two bands “facts”
Uh, came with the sticks like they hunting n—a
Throwing gang signs, call it (?) n—a
Can’t nobody at QC get punked, n—a
What is a one-on-one, n—a? We jumping n—-s
We got the strap, n—a, f–k it, we stomping n—-s
I’m just as rich as your favorite rapper, n—a, might be richer “yeah”
Hit the pent like I’m Derek Fisher
F–k the b—h right, then I kiss her
Ride around town, you the one who licked her “ew”
Ha, real player like my pops “pops”
Thirty round in my Glock “doot-doot-doot”
We run it, not opps “ha”
Ten toes on my sole, n—-s wouldn’t double dare to cross the big Boat “yeah”
Last year, I was 19, had 300K inside a Kith coat “yeah”
Pull up deep, wide body n—a
Feel like Jeremy Shockey, cold as Minnesota “hoo”
Bought my moms a Rover but I ain’t BlocBoy “skrt”
But I do keep a Glock for opp boys “doot-doot-doot”