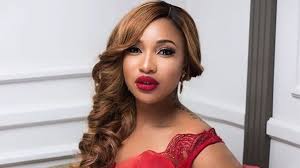 Tonto Wigo Charity Dikeh-Churchill (born 9 June 1985), better known as Tonto Dikeh, is a Nigerian actress, singer, and philanthropist. Dikeh hails from Rivers State and is of the Ikwerre tribe.

She featured in a movie titled Dirty Secret which generated controversy amongst Nigerians because the movie contained numerous adult scenes which at then was quite alien in the Nigerian movie industry. While some criticised her role for being untraditional and un-African, others said that Dikeh was merely being professional.

After enjoying acting several movies, Dikeh decided to try her hand in music though she had once featured in a music video owned by Amaco investments where she and Patience Ozokwor were called to mime the song. She made her debut by releasing singles ‘Hi’ and ‘Itz Ova’ feat Snypa. While many lauded her effort, the songs were trailed by controversy as critics especially questioned her vocal ability. Doubts were raised on whether her decision to try her hands on music was for the best. On 13 June 2014, Pop star D’banj, unveiled Dikeh under the artistes with his record label DB Records’ LEE family. She announced her departure from DB records in March 2015.

Dikeh was born into the family of seven, she lost her mother at the age of 3. Dikeh is the 3rd child out of her 5 siblings, and two siblings from her step-mother. Dikeh studied Petrochemical Engineering in the prestigious Rivers State University of Science and Technology. In August 2015 Tonto traditionally married Oladunni Churchill by February 2016, she welcomed her first child, (Andre Omodayo Churchill). In 22 June 2016, Tonto Dikeh celebrated her Instagram followers after she clocked one million followers on the picture sharing platform.

On International Women’s Day in 2017, Tonto came forth with a video confession of being a victim of domestic violence and getting infected with STDs in her marriage by Oladunni Churchill. Before this, there had been speculations that her marriage had hit the rocks because of her husband’s infidelity with one of his protégé, Rosaline Meurer. On her Instagram page, Dikeh accused Churchill of murdering their unborn child through domestic violence and being an internet fraudster, popularly known as ‘yahoo boy’