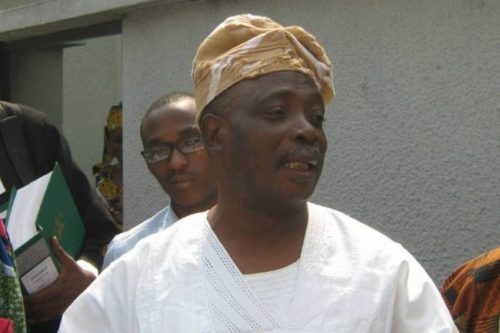 Former governor of Oyo State, Senator Rashidi Ladoja, on Thursday said that since ex-Governor Olagunsoye Oyinlola and himself left the government in 2010 and 2007 respectively in Osun and Oyo, there had been no good governance in both states.

Ladoja, who stated this in Ile-Ife during the mega rally held by the African Democratic Congress (ADC) to canvass for votes ahead of September 22 governorship poll in Osun, with a view to shore up the electoral fortune of the party’s flag bearer asserted that “since Oyinlola and myself left government in both Osun and Oyo, there had not been good government in both states.”

Speaking in Yoruba language, the erstwhile governor said: “I thank the Ooni for the reception given to us. I am here in Osun because of Fatai Akinbade. He was a commissioner with us in Oyo before the creation of Osun. If Osun had not been created, maybe he would be contesting for the governorship seat in Oyo by now.”

Ladoja further affirmed that “Fatai Akinbade is capable and I want you all to vote for him. He has got the experience and technical know-how of government. Akinbade was the SSG when I was the governor of Oyo State. I want you all to vote wisely for only him and his running mate during next week Saturday governorship poll in Osun State.”

In his remark at the rally, Oyinlola reiterated the critical need for all Osun indigenes and residents, who were passionate about the genuine and steady development of all sectors in the state to votes massively for the standard bearer of the ADC, Akinbade and his running mate, retired Justice Folahanmi Olamide Oloyede in the next Saturday poll.

According to him, “somebody (Oloyede) who was fighting for the masses when she was in service and because of it was sacked, such a person should be able to serve effectively well in government because of her pedigree for the welfare of the common men and women on the streets.

Oyinlola posited that “when you get to the polling booth, the symbol of our party is a handshake. It is easy to spot or identify. Vote massively for the ADC on September 22, 2018.”

While addressing the crowd of party loyalist and other categories of people who converged on Enuwa Square, venue of the rally in Ile-Ife, Akinbade averred that “we all know what we are facing in Osun. It is enough of suffering in Osun. That is why you have to vote for me to end poverty and mystery in Osun State.

“Our education sector has suffered much. When we were in government, the position of Osun in WAEC rating was between 4th and 6th position. Now, we are occupying 24th, 26th positions in WAEC rating. We cannot afford to continue like this. We must revamp our education sector. We have the plan to embark on full-scale mechanised farming. We would resuscitate the abandoned free trade zone to create jobs for the people.

“When we get to government, we would clear the arrears of half salaries and commence payment of full salaries to all categories of workers by December 2018. The state of our public health institution is appalling and we are going to address it squarely.”

“There is too much of wastage in government in Osun, the money we would use to rejuvenate the economy of the state would be internally generated. Majority of jobs that were hitherto done by local government staff and civil servants in the secretariat have been contracted to consultants.”