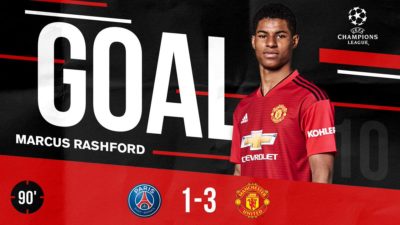 PSG vs Manchester United 1-3 (AGG 3-3) Highlights Download 06 March 2019 UEFA Champions LeagueUnited are without several first-team players, leaving their bench barren this evening. Juan Mata, Nemanja Matic, Jesse Lingard, Ander Herrera, Phil Jones, Antonio Valencia, Matteo Darmian and Alexis Sanchez are all injured. Pogba is suspended after being dismissed for two bookable offences in the first leg. Solskjaer makes two changes to his team that beat Southampton in the Premier League last time out. Fred and Bailly come into the side, as United play with a back three and a five-man midfield. Rashford and Lukaku lead the line.