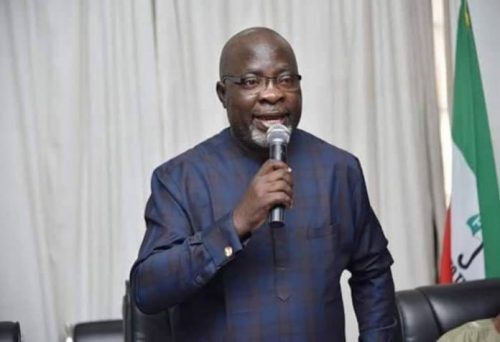 The Peoples Democratic Party (PDP), has asked the National Assembly to immediately open an investigation into alleged syphoning of over N10 trillion by “the cabal in the Buhari Presidency, concealed under the tenure of the erstwhile Minister of Finance, Kemi Adeosun.”

The main opposition party asserted in Abuja on Sunday that its position is predicated on allegations that the Buhari Presidency and the All Progressives Congress (APC), being aware of the former minister’s NYSC Exemption certificate liability, used her to conduit the syphoning of trillions of naira from the national treasury.

In a statement issued by Kola Ologbondiyan, its National Publicity Secretary, the party urged the parliament to probe the books of the finance ministry during Adeosun’s tenure as well as the ministry of petroleum resources, which is under President Buhari to expose those behind the N9 trillion fraudulent oil contracts detailed in the NNPC leaked memo, the N1.4 trillion fraudulent oil subsidy regime, the alleged diverted N1.1 trillion worth of crude oil through 18 illegal companies linked with APC interests, among others.

The PDP also insisted that Mrs Adeosun must be made to explain how the $321 million (N115 billion) repatriated by Switzerland was opened up for “relooting” by the Presidency cabal and corrupt APC leaders, at the same time she was in the media telling Nigerians that the funds were being transferred to the poor and vulnerable household under a discredited social safety nets system.

The party added, “Mrs Adeosun must also be made to tell Nigerians how a cabinet minister close to President Buhari directly stole $16.9 million (about N7billion) from the returned $321million as non existent legal fees before the fund became an Automated Teller Machine (ATM), for members of the Presidency cabal and APC leaders.

“The former minister should also be made to expose where the pressure that compromised the system for the stealing of over N25 billion National Health Insurance Scheme fund (NHIS) from the Treasury Single Account (TSA), was initiated.”

The PDP invited Nigerians to note that President Buhari, as ‘Mr. Integrity’ has refused to order an investigation into huge allegations of corruption and stealing under his watch, particularly those in the petroleum sector, where he directly presides as a minister.

It further said in fact, the Presidency has suddenly gone dumb after the party challenged President Buhari to start his declaration to jail looters by allowing an open inquest into the Petroleum ministry, as well as allegations of corruption against his ministers, special advisers, and leaders of his party.

According to the statement, since it has become clear that the President “is providing official cover for corruption under his regime,” the PDP urged the National Assembly to subject all officials of the Buhari administration to an integrity test, “as Nigerians can no longer bear consequences of a pretentious administration run by very corrupt individuals and fraudulent characters.”