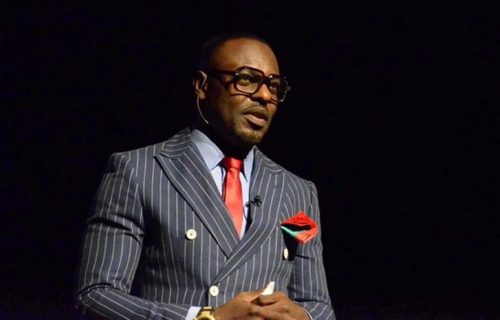 James Ikechukwu Esomugha, popularly known as Jim Iyke, is a Nigerian actor in Nigeria’s movie industry (popularly called Nollywood) and one of the stars of the movie Last Flight to Abuja alongside Omotola Jalade Ekeinde and Hakeem Kae-Kazim.

He was born on September 25, 1976 in Libreville, Gabon. His parents are Mr and Mrs Stephen Okolue, whose last name changed to Esomugha from Enugu Agidi town in Anambra State. He is the only boy in a family of eight children.

Jim Iyke studied at the University of Jos, Plateau State where he got a diploma in Banking and Finance and then a B.Sc. in Philosophy.

Jim Iyke began acting in 2001. He’s one of the highest paid actors in Nollywood., and has appeared in over 150 films. He started a movie production company, Untamed Productions in 2007. Jim Iyke began his own music label, Untamed Records. He produced a first album, titled “Who Am I?” featuring some of Nigeria’s top musicians such as TuFace Idibia, and Sound Sultan.

The controversial video of Iyke’s purported ‘deliverance’ at The Synagogue, Church Of All Nations, led by Pastor T.B. Joshua went viral and led to intense debate on social media. The ‘evil spirit’ supposedly confessed that it was behind Iyke’s inability to get married.

Jim lyke is the founder of Jim lyke Foundation for Children with Special Disabilities. He visited Kenya in December 2012 in support of the Make a Change Campaign, a charity project founded by Christopher Grey, and Jamaican dancehall artist Cécile.