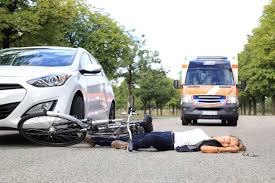 Car accidents happen all the time – one drive down the freeway can attest to that. To avoid getting into one yourself, you need to account for yourself as a driver and for those around you, too. Not only will this lead to safer driving, but it can also save you time and unnecessary expenses.

1
Slow down. Speeding reduces the time you have to react and increases the likelihood of you having an accident. The faster you’re going, the harder it is to slow down. When you can’t slow down, you are risking the possibility of causing an accident.
Remember that police officers often stay hidden from view while looking for speeders. If you’re caught driving too fast, they won’t hesitate to give you a ticket. While this isn’t an accident, it’s certainly another thing you want to avoid.

2
Stay in your lane. Defensive driving means letting others go ahead of you and not defending your position in traffic. Avoid the urge to be a vigilante (“Oh yeah? Let me show you what it’s like to be cut off like that!”) and stay away from weaving and cutting others off by sticking to your lane. Accept the fact that someone is always going to think they’re in more of a hurry than you. These are the drivers you want to move far away from. Don’t be tempted to “teach them a lesson” – it won’t work.
In general, avoid the left lane. It’s where most accidents happen.[1] You also have more “escape routes” in the right lane should a problem suddenly arise that requires you to quickly change lanes or pull onto the shoulder.

3
Drive with both hands on the wheel. Two hands on the wheel allow you more control over the car if an emergency situation were to arise. Imagine having one hand leisurely resting on it when you have to swerve out of the way – you lose that precious split second in adjusting your position that could mean the difference between safety and an accident.
Keep your hands in the 10 o’clock and 2 o’clock positions. While this isn’t necessarily the most comfortable, this position does allow you the most flexibility should you suddenly need to adjust your course.[2]

4
Don’t tailgate the car in front of you. No matter how slowly traffic is moving, keep at least two seconds of following distance between you and the car ahead of you. Any less and you won’t be able to stop in time if the driver in front of you slams on their brakes.
This is especially important during high traffic times. You may think the car ahead of you is speeding up significantly, when really they’re moving forward only to stop again. If you don’t tailgate, you’ll put less wear on your brakes and save gas, too. All that stopping and starting isn’t good for your vehicle.

5
Use your signals properly. Always use your signal, even if you think no one is there. When changing lanes on the freeway, don’t signal as an afterthought or during the lane change. Signal at least a couple of seconds in advance so others know what you’re going to do before you do it and can account for your actions should there be an issue.
Ever notice how most of the skid marks along the highway are just before an exit ramp? This is where you have to be the most careful.

6
Keep your eyes moving. Don’t get in the habit of staring at the back of the car ahead of you. Periodically shift your eyes to the side-view mirrors, the rear-view mirror, and ahead to where you’ll be in 10-15 seconds. Doing this, you can spot a potentially dangerous situation before it happens.
This can help you predict what traffic is going to do. Looking at the cars a few ahead of you will let you know whether you’ll have to soon hit the brakes or not.
This will help you monitor your blind spot as well, which makes it much easier to know if the lane changes you want to make are safe.

7
Always wear a seat belt. This is a must, no matter where you are, what kind of car you’re driving, or where you’re driving to. By law in many countries, all cars must have a safety restraint and it must be used. Buckling up only takes a second and can save your life in an accident.
Children should always be in a booster seat or car seat until they are tall enough and heavy enough to sit by themselves. This generally includes children age eight and under.[3]
Never put a child in a car or booster seat in the front passenger seat or another seat with airbags. Children should generally be 12 and older when sitting in the front passenger seat.

SEE ALSO:  Best Romantic Text Messages For Him to Make Him Smile

9
Park between two other vehicles. Many minor car accidents occur in parking lots, mostly when either parking or leaving the parking space. If you park in a space without vehicles in the spaces to either side of you, this potentially gives several other cars the chance to hit your vehicle while attempting to park next to it. If you park between two other vehicles, you reduce the chance that other cars will attempt to park next to yours and possibly hit it.