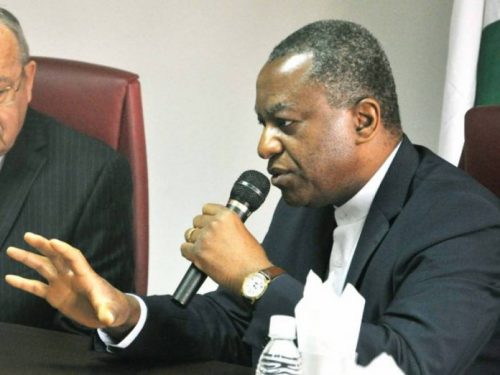 Onyeama made this known on Tuesday in Abuja in an interview with the News Agency of Nigeria on the sidelines of valedictory meeting on the retirement of the Ministry’s Permanent Secretary, Ambassador Olukunle Bamgbose.

The minister, who was speaking on his Wednesday’s visit to Sao Tome and Principe, said that he was there to represent President Muhammadu Buhari.

He said: “It was to provide technical assistance to Sao Tome and Principe, the country is having election very soon and we are very keen and we are working towards how to make it peaceful.

“Mr. President really believe and is interested in supporting neighbouring countries, so it was part of what made the president to send assistance to them.”

The minister, who in his remarks earlier commended the retired permanent secretary, described Bamgbose as a right man to work with.

Onyeama said: “He is a hardworking man that is ready to put his best; he has all the qualities that I admire, very hard working, very loyal as well.

“I like his kind of person, if he doesn’t agree with me, he will tell me why he doesn’t; he will advise me and he was very productive; so we really enjoyed him.”

Bamgbose in his remarks said that he was fulfilled as a permanent secretary, adding that he achieved all his set goals as in that position.

He said: “I came up with “quick wins“, and in one year, all the things I thought I could do, I did all of them, so I am going out as a permanent secretary fulfilled.

“I am not going with any regrets because I did all I was supposed to do.

“I am fully satisfied now that I addressed some of the challenges identified when I was growing up in the ministry.”

The outgoing Permanent Secretary urged the staff of the ministry to remain focused and sustain the legacy he left behind.

SEE ALSO:  Policeman Under Fire After Responding To Duty In A Drunken State

Bamgbose said: “What is important is that the work is continuous, I have done my own part, others will also do theirs, when you do your bit, things will move forward.

“I am challenging the officers behind me to follow some of the things I laid down.

“With the combined efforts, we can make some changes in the foreign services with beautiful decisions, every officer can come and serve and make impact.”