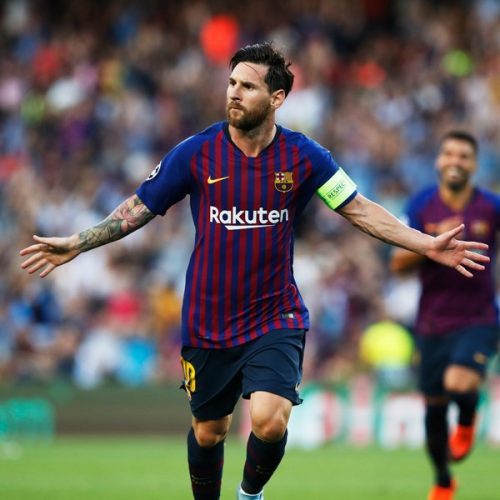 Ten-man Barcelona got their 2018/19 UEFA Champions League campaign off to a winning note defeating PSV Eindhoven 4-0 in their opening Group B clash at the Camp Nou on Tuesday reports Completesportsnigeria.com.

A hat-trick from Messi and another strike from Ousmane Dembele extended Barcelona’s winning streak at home to 27 games.

Barcelona dominated the game in the opening stages without coming close to opening the scoring as PSV were very solid in their defence, but just after the half-hour mark, Nick Viergever committed a foul on Ousmane Dembele.

Messi curled in the resultant free-kick to give Barcelona the lead in the 32nd minute of the game. The goal was Messi’s 14th in consecutive Champions League seasons. He became the second player ever to do so after Real Madrid’s Raul Gonzalez.

Dembele fired home a stunning strike with 15 minutes to go. Messi made it 3-0 two minutes later after he fired home a pass from Ivan Rakitic.

The Argentine bagged his hat-trick with two minutes left to play after finishing a brilliant past from Luis Suarez to secure Ernesto Valverde’s side’s big win.

At the Sansiro Stadium in Milan, Italy, two late goals from Mauro Icardi and Matias Vecino gave Inter Milan a 2-1 win over Tottenham

A Christian Eriksen’s deflected strike gave Tottenham a 1-0 lead in the 54th minute but Icardi drew Inter level with a stunning volley.

Vecino completed the turnaround with a last-gasp header to hand Tottenham a third straight defeat in all competitions following the Premier League setbacks against Watford and Liverpool.