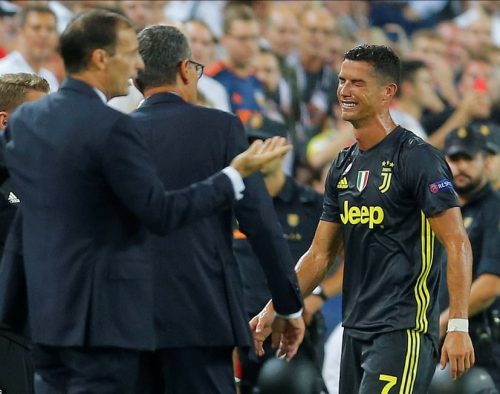 Juventus head coach Massimiliano Allegri has called for the introduction of video assistant referees in the Champions League after Cristiano Ronaldo was sent off in Wednesday’s 2-0 win away at Valencia.

A brace from Miralem Pjanic gave Allegri’s side a 2-0 victory.

Ronaldo who is the Champions League’s all-time leading scorer with 120 goals, was sent off after 28 minutes following an off-the-ball incident with Valencia defender Jeison Murillo, who fell to the ground after he was shuffled and Allegri admits a review of the incident would have helped the decision of the referee, Felix Brych.

“I can only say that VAR would’ve helped the referee in this decision,” Allegri told reporters at the post-match press conference.

“Going down to 10 men in the Champions League for an incident like that is disappointing. We risked losing tonight with this and we’ll miss him for the next games too.”

The red card was the first for Ronaldo in 154 Champions League games and means he may miss a return to Old Trafford when Juventus play his former club Manchester United next month.

“The lads did really well as we had numerous chances even before Ronaldo’s dismissal, then we deservedly took the lead,” Allegri added.

“It was only natural that towards the end we allowed Valencia some more room, but Szczesny didn’t really have a save until the penalty in stoppage time.”